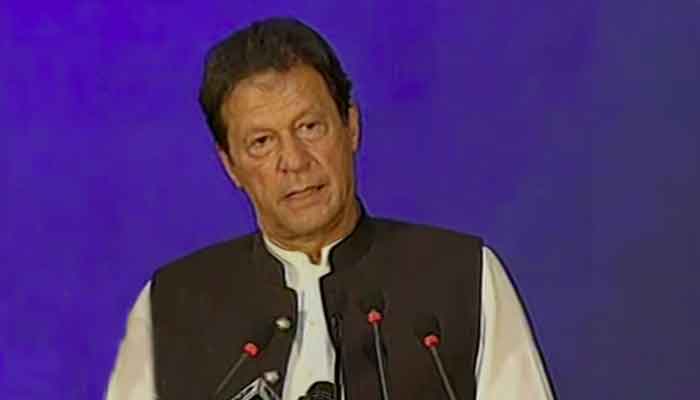 Prime Minister Imran Khan on Thursday presented a charter of his party’s performance so far at the Jinnah Convention Centre in Islamabad.

Talking about his career as a cricketer, PM Khan explained how his life as a sportsman, “where there are standing ovations one moment and curses the next”, prepared him for a life of struggles.

“Until you go through struggles, you cannot do anything big,” the prime minister said. “No leader became big with a shortcut. Quaid-e-Azam was a big leader. He struggled in his life and people will always remember him [for that].”

Mentioning Pakistan’s clash with India in the aftermath of the Pulwama incident, PM Khan thanked the army for effortlessly protecting the people of Pakistan.

“I appreciate our army and air force. As they (Indian fighter jets) came into our territory and launched an offensive, we realised the [power] of our army,” said the premier.

The premier blamed a “mafia” for defaming state institutions. “I also criticised the army in the past,” he said. “Judiciary and army also make mistakes but it doesn’t mean we should [expect] them to topple the democratic government.”

“We know the Indian lobby is trying hard to defame Pakistan Army. They are implying that the Taliban won because of Pakistan Army.”

“In our tenure, Punjab’s anti-corruption has recovered Rs450bn so far,” he claimed. “NAB (National Accountability Bureau), in its 18 years before we came to power, had recovered Rs290bn and in the last three years, they recovered Rs519bn. All hue and cry are because of this reason.”

The premier reminded his audience of the efforts made to “empower women” in rural areas and stressed the need to educate women, adding that “this is what we are trying to do”.

“We are also working on inheritance laws to ensure women get their due share in the property,” he added.