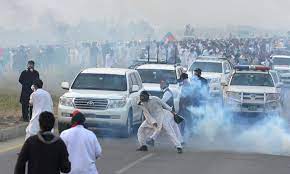 Interior Minister Rana Sanaullah said if the need arises, fresh, effective and updated tear gas will be used against Pakistan Tehreek-e-Insaf (PTI) supporters who are ready to hold a rally at Islamabad’s Parade Ground today.

Meanwhile, it has been reported that a pistol was recovered from a man who was present at the rally venue.

The police have arrested the man and he is now being investigated.

In a press conference today (Saturday), Sanaullah said that the expired tear gas, which he claimed was bought by his “predecessors”, had finished. “Now they [police] will get everything effective, fresh and updated if the need arises.” However, he advised participants at PTI rally not to cause chaos. “It would be better if they don’t create a situation.”

He said that in the future, any such “seditious” rallies won’t be tolerated in the capital.

Regarding a question about PTI Chairman Imran Khan, the federal minister said he should “correct” his matters and refrain from “creating rebellion and instability” in Pakistan.

“All the political parties in the country at the moment are on one side, trying to solve the ongoing crises, while Imran Khan is busy abusing everyone and playing the politics of hatred,” the interior minister added.

On Friday, the Staff Duties Directorate at the General Headquarters (GHQ) Rawalpindi permitted PTI to organise its jalsa at Parade Ground in the federal capital.

The permission is only valid for July 2. The NOC was given on the condition that the public gathering shall not disturb or disrupt the fundamental rights of the citizens of Islamabad and adjoining areas nor shall it block Islamabad Expressway or any other road. The gathering shall end at midnight.